The Battle of Midway was an epic battle that took place during World War Two at the beginning of June 1942, only six months after the Japanese attack on Pearl Harbor (which is about 2,100 kilometers or 1,300 miles, east of Midway), and one month after the Battle of the Coral Sea. The battle became one of the most critical American naval victories of the war.
It was called the Battle of Midway because it took place around the fairly isolated place called Midway Island, named this because it is midway between North America and Asia in the North Pacific Ocean, which also made the island a significantly strategic location and the Imperial Japanese Navy had plans to secure their strategic stronghold in the Pacific theater of the war. Not having lost a naval battle in over 50 years, and nearly destroying the American fleet only six months before in their surprise attack on Pearl Harbor, Hawaii, they were pretty confident of achieving their aims.
This time however, American military and intelligence forces worked together in an unwavering attempt to defeat the Japanese. American codebreakers managed to decipher Japanese naval code which allowed American leaders to anticipate and foresee the maneuvers the Japanese planned, then allowing the U.S. Navy to surprise the larger Japanese fleet with an attack they weren’t expecting, also successfully defending its major base that was located at the Island, all of which ruined Japan’s hopes of neutralizing the United States as a naval power. 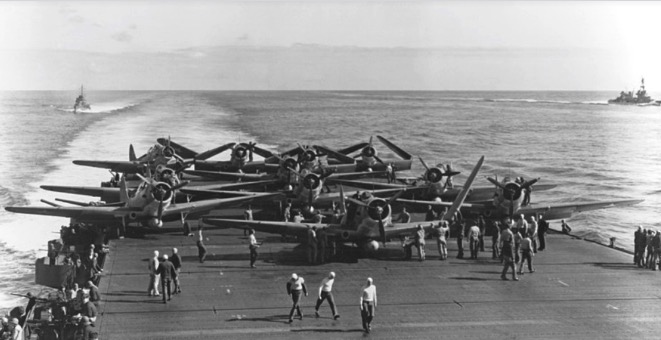 The Battle Of Midway

The Japanese had assumed that the U.S. aircraft carrier ‘Yorktown’ wouldn’t be in action in Midway since the aircraft carrier was damaged during the Battle of the Coral Sea. In fact, the damaged carrier was repaired in two days, with more than 1,400 repairmen working around the clock, patching holes with steel plates at the Pearl Harbor Navy Yard, so that it was ready by the 30th May to regroup with the other U.S. Navy ships close to Midway in preparation for the Japanese offense, leaving the Japanese to be caught off guard instead.
Not only did the naval codebreaking assist the American navy and help them get advance warning of Japan’s plan of attack but they also benefited from another key technological development at Midway. The U.S. Naval Research Laboratory had developed the first radar system prototype by 1938, so that all three U.S. carriers and other ships were fitted with early radar systems, allowing them to detect approaching enemy aircraft at long range and be better prepared for oncoming attacks, while the Japanese ships could only rely on human lookouts so that U.S. dive-bombers would remain undetected until they were almost in attack position.
Even though the Battle of Midway is not exactly the absolute turning point in the war between the U.S. and Japan that many state it to be, and the war went on for another three years, it did, however, represent the point when the momentum shifted from the Japanese to the Americans in the Pacific. Japan’s Imperial Navy didn’t succeed in delivering the knockout blow it expected, and instead suffered a massive setback when it lost four aircraft carriers, nearly 300 planes and just over 3,000 men including some of their most experienced pilots. As the war continued Japan had no effective way to replace all the lost aircraft carriers, while at the same time, U.S. shipyards were rolling out new carriers in 1943. Vessels such as those, along with the rest of the nation’s unprecedented wartime production, would be what would lead the American fleet to the 1945 victory in the Pacific.