How People Lived Without Electricity

People had many sources of light before electricity. They would use kerosene lamps, candles, fireplaces, and gas lamps. Candles and lamps are convenient ways to light up your room as these are portable and you can take them anywhere you go. However, they aren’t as bright as light bulbs.

As you might have guessed, food storage was a problem before refrigeration came. However, people found ways to keep their meats fresh for longer periods. They would have meat safes around the house — usually the coolest part of the home and away from direct sunlight — and these containers were helpful in keeping flies away from the food too. When ice came, there were iceboxes to help store food. People before also learned how to preserve their food by salting, drying, and smoking.

The only possible way to cook food was over an open fire like a fireplace or a metal stovetop. Bakers had to make do with manual labor for tasks that we would usually use a mixer for. Ovens made use of fireplaces to bake bread and other food products.

The cold winds of winter can be harsh and brutal without any source of heat. Nowadays we have electric heaters to warm up our homes. The only way to heat up your home before was to sit close to a fireplace and use an extra blanket. It was essential that every home had stock of firewood before the winter months came as these would be used to heat up the house and cook their food. 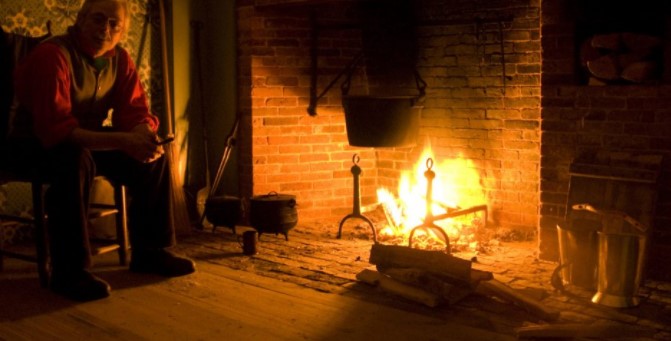 Warm or hot water is often taken for granted because it’s so easy to get a hold of it. Before, you’d have to build a fire first before placing a kettle over it. This would mean that taking a warm bath was a tedious and tiring task, one that we take for granted now because of how easy it is to run a warm bath. This could explain why people took less baths before. It was a chore to clean themselves, especially so during summer months when building a fire wasn’t something you would want to do in the summer heat.

Before electric steamer irons, there were coal and gasoline irons. Yes, coals and gasoline! These olden irons were made of metal. The coal variety would either be heated on top of the stove or coals would be placed inside of it. Gasoline-powered irons were considered an advancement already as this used gasoline and had heat control.

Before washing machines, people had to use manual labor to make sure their clothes were clean. They’d hand wash them and use washboards. Washboards were placed on a tub and had ridges on them where you’d rub the clothes to help remove stains. Eventually, manual washing machines became the norm. You’d have to manually swish the clothes inside a tub of water to remove dirt and stains. People used to step on clothes too to help remove any stains and dirt and it became a fun activity for kids (not so much for the grown-ups).

After knowing about how difficult it must be for people before to live their lives with electricity, we can hopefully find the time to appreciate the different appliances and inventions that help make our lives easier.