Art expresses a person’s ideas and emotions as an activity or a product to communicate or even simply for the aesthetic. In this article, we are going to look at the best painters from various countries in Europe.

Pablo Ruiz, also known as Pablo Ruiz Picasso, was one of the greatest and most influential artists of the 20th century. Born on 25th October 1881, he was a Spanish painter, sculptor, ceramicist, printmaker, and theater designer. Pablo was an expatriate artist, having spent most of his adulthood in Paris despite being a Spanish citizen. He picked up art at the young age of ten, becoming his father’s pupil and growing up to spend 80 years out of his 91 years of existence dedicated to art.
Famous Artworks include:
Guernica, The Weeping Woman, The Old Guitarist, The Girl Before a Mirror, and many more.

Oscar Claude Monet was a famous French painter born on the 14th of November 1840. He was one founder of the Impressionist movement that transformed the French painting world in the late 19th century. Monet’s wish to capture the very art of perceiving nature on his canvas led him to develop a method of painting the same painting repeatedly until he was satisfied with the lighting and the variation of colors.
Famous Artworks include:
Impression, Sunrise, Rouen Cathedral series, Water Lilies, Haystacks, and many more.

Michelangelo di Lodovico Buonarroti Simoni was an Italian Renaissance sculpture, painter, architect, and poet who had an unseen influence on the development of the world of Western Art. He has been described as the greatest artist of his age and even the greatest artist of all time by many scholars. Michelangelo is said to be the only artist of his age who has been documented in such a distinct way. He was widely referred to as Il Divino, which means the divine one.
Famous Artworks include:
David, Pieta, Moses, The Last Judgement, Bacchus, and many more.

Vincent Willem van Gogh, born 30th March 1853, was a Dutch painter who was widely considered one of the greatest post-impressionists. He has immensely influenced expressionism in the modern western art world. His bold, expressive, and dramatic brushwork characterized this expressionism in his landscapes, self-portraits, still-lifes, and portraits. In 10 years, he had made over 2,100 artworks, most of which were done in the last two years of his life. Despite his large popularity in the modern-day, most of his work was recognized after his death.
Famous Artworks include:
Sunflowers, The Starry Night, Portrait of Dr. Gachet, The Potato Eaters, Bedroom In Aries, and many more.

Paul Delvaux was a well-known Belgian surrealist painter and printmaker, despite only briefly identifying with the surrealist movement. He was highly recognized for his dream-like scenes of women, classical architecture, skeletons, train stations, and trains. These were often seen together in a combination of mysterious settings as well.
Famous Artworks include:
Phases of the Moon, The Sleeping Venus, Skeletons in an office, The Village of Mermaids, and many more. 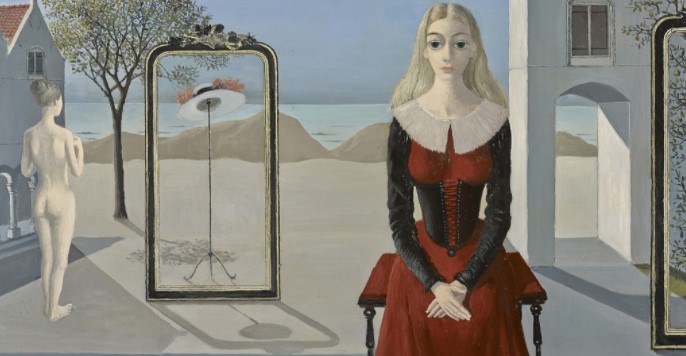 Maria Helena Vieira da Silva, born on 13th June 1908, was a Portuguese abstract painter. Her art style is a mixture of constructivism, cubism, and futurism. She explores space and perspectives using lines in her work featuring complex interiors and city views. Having lived through the second world war, Maria’s paintings focus on the postwar environments such as burned-down cities, buildings, and alleyways along with sunsets and landscapes. She is considered to be Portugal’s greatest contemporary artist despite being a French citizen.
Famous Artworks include:
The Corridor, Le Promene Invisible, A Library Burning, Passage of the Mirrors, and many more.